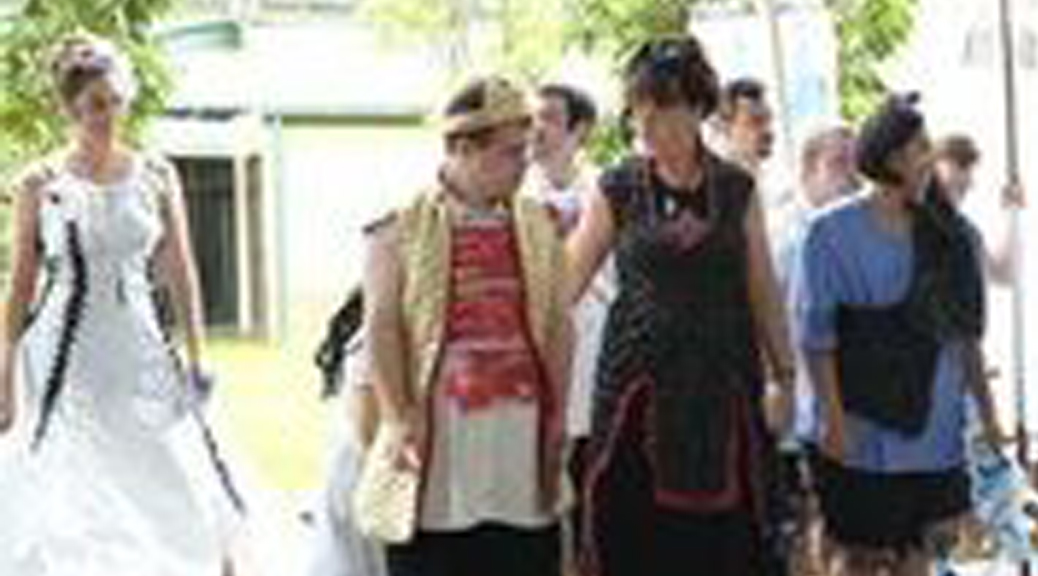 Video tape dresses and moulded plastic costumes will be paraded by the ARC Ensemble at James Cook University on April 11.

The parade and performance by the ARC Ensemble will be a feature of JCU’s Sustainability Symposium and Fair, Challenging Consumerism: The War on Waste, at the Cairns campus.

Artist and student Ruby Boussard said the costumes which were made from 100 per cent recycled and reclaimed materials including packaging found in rubbish bins, were an ideal way to show how these materials could have another life.

After marching through the courtyard and around Founders Green in their recycled costumes, the ARC Ensemble will be on stage at JCU’s Cairns Institute on April 11 for their performance of Sprucing Shakespeare.

Sheridan Lawton of ARC Disability Services said Tropical Arts has been bringing ARC members into ‘Shakespeare at the Tanks’ for the past four years.

For the 2013 production this was further supported by a JCU Action for Sustainability Fund, allowing Ms Boussard to conduct 100 per cent recycled costuming workshops with the ARC Ensemble.

“This ensured all the participants were comfortable in their costumes, participated in their making and had the opportunity to consider the advantages of using second hand materials and clothes,” Ms Boussard said.

“The Parade and Performance at the upcoming Sustainability Symposium is the final celebration of this process.”
In addition to the program of speakers, the free event incorporates workshops including recycled craft, a clothes swap, food, live music and stalls featuring the Kuranda Seed Savers and the Saltwater Creek Basketry Group. To register go to alumni.jcu.edu.au/2014SusSympFair

The ARC Ensemble will also be participating in this year’s Tropical Arts production of “Much Ado About Dragons” at the Tanks Arts Centre in October.

I was given the opportunity to support CAFNEC and display some work next to their stand in Rusty’s Markets for September 2013.

The very first try-on with real actors of costumes.  The video star range were clearly a sucess, but my ideas about breast-plates less so.  The actors noticed the branding on the plastic, which I had not been looking at.  I had only been thinking about the colours red, white and blue.